Note: this post documents details about new functionality in Xcode 13.2 beta 1, which is subject to change over the course of the beta cycle as well as into the future. Please proceed with caution.

During the State of the Platform presentation at WWDC 2021, Apple announced that the upcoming version 4.0 of the Swift Playgrounds app for iPad would introduce support for full-fledged app development, including the ability to upload to App Store Connect! This announcement was relatively minor amongst everything else revealed back in June, but it did raise a question in the back of my mind – what would those new playground projects look like?

Just last week, Xcode 13.2 released its first beta. While we wait for the full release of Swift Playgrounds 4, I was surprised that not only would that question be answered by Xcode, but the new Swift Playgrounds App Project format would also share a compatibility story with Xcode! This has me more excited than ever about the future of the Xcode project format.

The Story So Far

For those who haven’t had the pleasure of digging into a Xcode project file merge conflict, let me briefly explain how it works. An Xcode project is what’s termed as a “package” in macOS terms, with the extension *.xcodeproj. Contained within it is a special file named project.pbxproj, which is usually referred to as the “project file”. The project file, introduced with Xcode 3.0, uses a proprietary, undocumented syntax to represent a huge graph of references and object definitions that make up the entirety of your project. These objects can be things like targets, phases, source membership relationships, build settings, external dependencies, and much more. GUIDs (globally-unique identifiers) are used liberally to manage the relationships between various records, much like a database. This file is automatically managed by Xcode, and should only be edited manually if required to get Xcode to parse it properly, such as in the event of a merge conflict.

I’m going to be referring to “packages”, which are special file system directory types on Apple platforms that contain documents and bundles and can open applications, and “Swift Packages”, which are a project structure for managing Swift and Objective-C projects using the Swift Package Manager. I will do my best to disambiguate between the two wherever possible, by lowercasing “packages” and titlecasing “Packages” for Swift Packages. My apologies in advance for any confusion.

The Xcode project file has long been the bane of many developers, especially those who have not developed the arcane and largely unnecessary skill of being able to read the syntax. In large projects or projects with a lot of file churn, merge conflicts are regular occurrences. This is because the representations of source files in the project that get frequently updated can easily get out of sync collide between independent changesets. As such, the community has produced several novel ways to either eliminate the Xcode project through generators like Tuist or XcodeGen, or minimize its impact through expanded use of Swift Packages.

Enter Xcode 13.2. This first beta introduces a new kind of project, fittingly named “Swift Playground Projects”, which are instead based on the manifest description format used with Swift Packages. Project manifests and their source files are entirely contained in a “package” with the extension *.swiftpm. You can create one of these projects by selecting File > New > Project and creating a new Swift Playground App in the template editor. 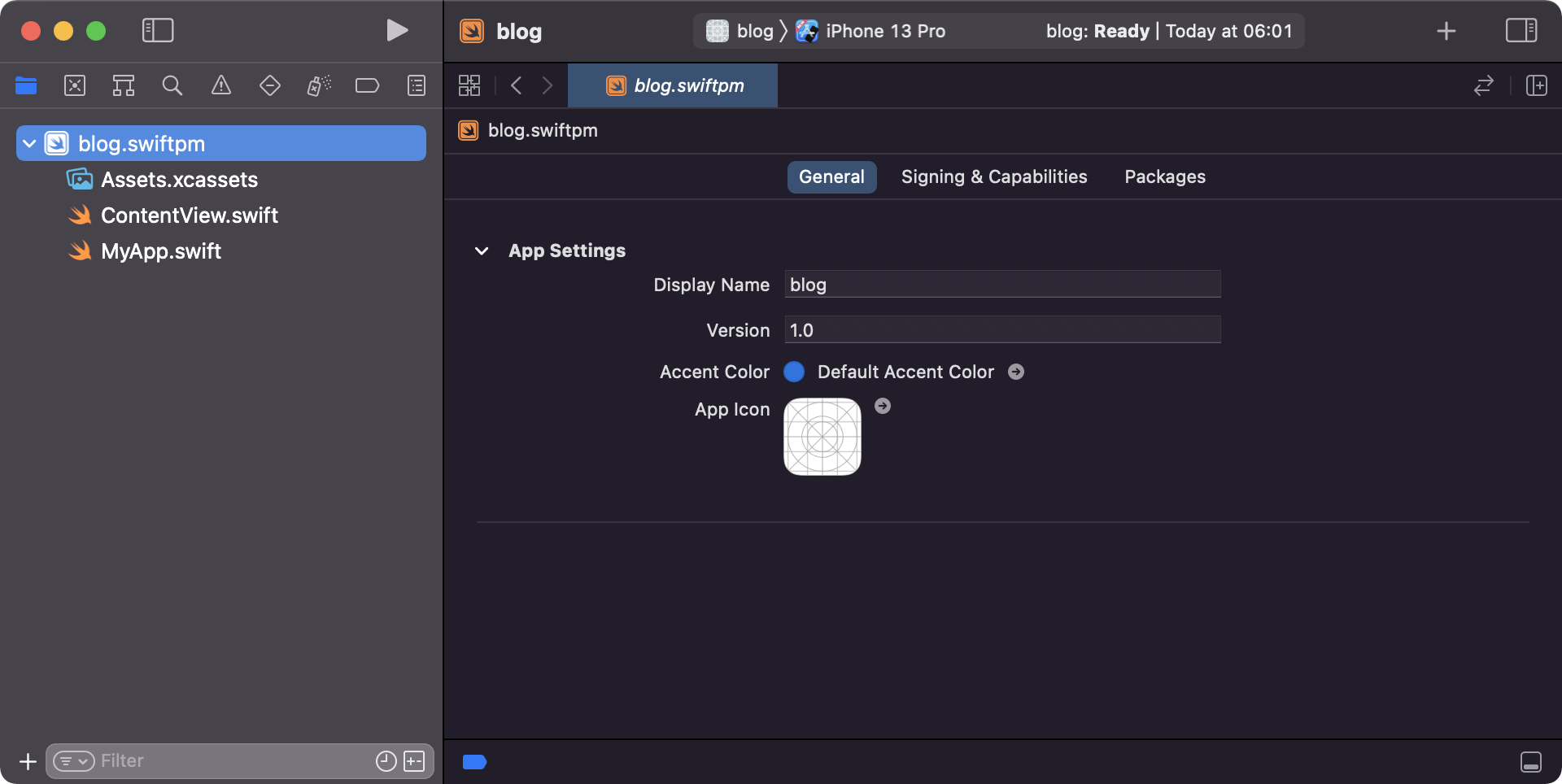 Default Swift Playground App projects come pre-configured with an App-conforming type, a ContentView, and an asset catalog containing placeholders for app icons and a color set. So far, this is all typical SwiftUI boilerplate. From there, if you inspect the project in Finder, you’ll discover a curious thing – this project is backed by Swift Package Manager! Could this represent the end of the Xcode project as we know it today?

Before we get our hopes up, let’s dig in a little further. Here is an excerpt of the Package.swift that is generated in a default project:

Let’s look at what this Package’s manifest is expressing. It’s declaring a minimum platform for all products in the Package, iOS 15.0. It’s declaring a new iOS application product, with the arguments set as configured in Xcode. It declares a single executable target, AppModule, to be the primary target bundled into the product. Finally, it is imploring us not to edit this file manually, since it’s intended to be managed by Xcode similar to a pbxproj.

Xcode’s fork of Swift Package Manager, available for inspection at /Applications/Xcode.app/Contents/PlugIns/IDESwiftPackageCore.framework/Versions/A/Frameworks/SwiftPM.framework/, contains the custom manifest types that make this all possible in a Swift Package. We can see the full definition of .iOSApplication in AppleProductTypes.swiftmodule (which I have edited to slightly-improve readability):

This seems promising on its own, but what else can we do with this format, and what are the limitations?

I’ve managed to uncover a variety of fascinating aspects and quirks to this new format that I’d like to enumerate here. Each thing would take a while to explain on its own, so I’ll try and be succinct with each one and you can ask me for more information on Twitter.

It’s also worth calling out some limitations of the new project format, and being an initial beta, there are plenty.

Beyond this list, I would be remiss to point out that while Swift Package Manager works quite well when invoked with swift-build, the fork of Swift Package Manager that ships with Xcode has been a regular source of pain and bugs since Xcode 11 started shipping an integration. This is the version that Xcode is using in the editor and while using xcodebuild. I’ve experienced more bugs, rough edges, and performance degradation with Xcode’s Swift Package integration than I recall ever experiencing with the open source version. I’m hesitant to recommend this project format as the backbone of any app’s configuration as the process for returning to a more traditional project structure feels daunting even in hypothetical. Hopefully, this is something that improves with time.

This is all very new, and subject to change over the beta. I have complete faith that by the time I put this to print, a new beta will release that will invalidate most of what I’ve written. That all being said, I hope you share my cautious optimism for a future someday where we won’t have to deal with project-file conflicts to nearly the same degree anymore.